Home  ›  Blog  ›  Reflections On Getting Just a Little Bit Older

Reflections On Getting Just a Little Bit Older 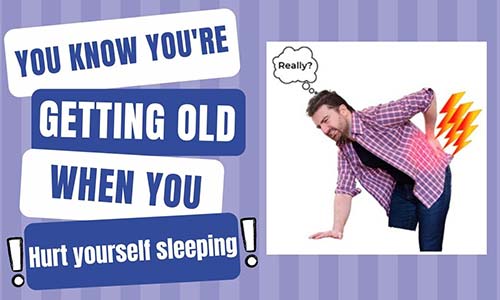 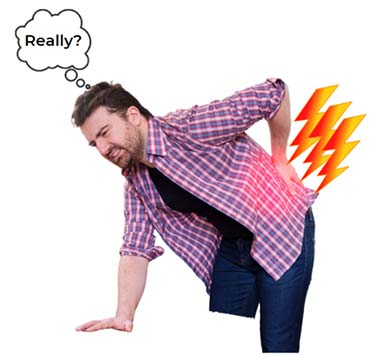 Comedian Billy Gardell quips, “You know you’re getting older when you hurt yourself sleeping.”

I often quote this to my friends and patients to lighten the mood when they are in pain in the morning after a night’s sleep. But the reality is, we are getting older.

“All I did was bend over to put the leash on the dog, and when I stood up, it was like a lightning bolt hit me right in my lower back.”

—Me, talking to my Physical Therapy colleagues at work (laughing and crying in pain at the same time).

In high school, and college I could do anything. Run all day, light weights, play sports and most injuries or aches could be brushed off.

Today, that’s one of things I hear quite often.  When we’re 16 or 18, even 22 and we feel like we’re kind of invincible but don’t realize that feeling is actually naivete.  We’re just not 18 or 10 anymore.

And if you’re lucky, you will not seriously injury yourself and we will survive those years and make it a couple more decades and then refer to those years as “when I was young and dumb.”

I had a back spasm a few months ago doing something very non-amazing nor sports oriented. My dog, who is relatively little needed to go for a walk, so I bent over to attach his leach and felt a little something in my back. Not bad at first, but then I stood back up, I felt a stabbing pain right where my lower back meets the top of my hip or butt.  I tried “walking it off” and I did walk a few excruciating steps in circles around my yard, while releasing a stream of four-letter words, along with “I’m a freaken physical therapist. This shouldn’t be happening to me!!!”

I immediately thought, I have done something like this before, same general area, painful, but not debilitating, and it takes a few days to loosen up. I know what to do and I’ll have to work and stand up from a chair in slow stages for a couple days, but it goes away, and I go back to my normal active life in short order.

This time felt more intense, though. I don’t know, maybe 40-50 percent more local and uncomfortable? I immediately got to the floor and started to move gently. Trying not to allow my muscles to assume the inevitable spasm they were sprinting towards. I came home and tried to release the spot with a massage ball (https://iptvirtual/ecomm/craig-brittanys-products), which didn’t do too much.

After an hour or so of trying to sleep in any position without pain shooting through my back and leg, I asked said, I think I need meds to calm this down, release the spasm and control the intense pain.

The doctor asked me to rate my pain level, on a scale of one to ten, and I thought about it. I know it’s a routine question I’ve asked many many of my own patients through the years to figure out how to help best deal with the pain, but in reality, everybody has different tolerances. Unfortunately, I have had several experiences from sports injuries and surgeries to bike accidents, and fractured bones, I knew just how to answer this question. I figured ten on the pain scale means something like you’re ready to die because it hurts so much. A nine-pain rating, then, to me, is maxing out, right at the edge, like you’re willing to continue, but barely—probably my upper limit of the human capacity to withstand pain. Admittedly, I don’t do pain very well.

One thing I could have added in response to injuring myself: “Getting old sucks.” And sure, I’m older now (49), and my body is less elastic than it was, say, ten or 15 years ago. But as people older than me would say, I’m really not that old. And if I’m honest with myself, it’s not because I’m old—it’s because my life priorities have shifted. I work more, I sit more, I read more, I drive more (I live in Miami, we drive everywhere, and the traffic is something awful). So I’m just not doing the mobilization and stabilization things I know to do – every day!!!

When I fill out the “activity” section of any questionnaire, I usually write the word “active” or sometimes “very active” in sharing things about yourself that you’re proud of. I do refrain from saying, “after my 10-15 hours of activity per week, I sit on my ass a lot and tap on keyboards and meet with our team and sit while treating patients, and then I try to justify that I move a lot throughout the day, but do I really? 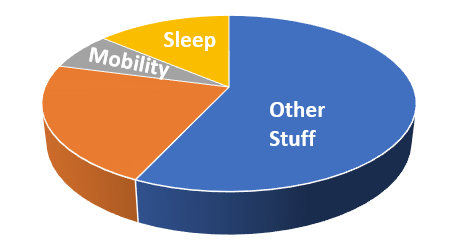 Hard work, I’d like to think, adds up. Well, as it turns out, all that sitting and not mobilizing also adds up, and eventually I will reap the rewards. Good or bad!

What the doctor told me was I likely have a herniated disc. My therapy team said, ‘Yeah, and now let’s get to work.”  As I understand it, the jelly is squeezing out of the donut between my L4 and L5 vertebrae, which is causing the pain, as well as numbness in my knee.  (We can argue this, but not here and not now. It’s a more in-depth conversation). Result - I won’t be exercising as intensely or running for several weeks.

All this is kind of a bummer. But I am also somewhat in awe of the body’s ability to basically rally against prolonged poor working conditions for the past two-plus decades, as one body part goes on strike and jams up the entire system. And then the ripple effect kicks in. 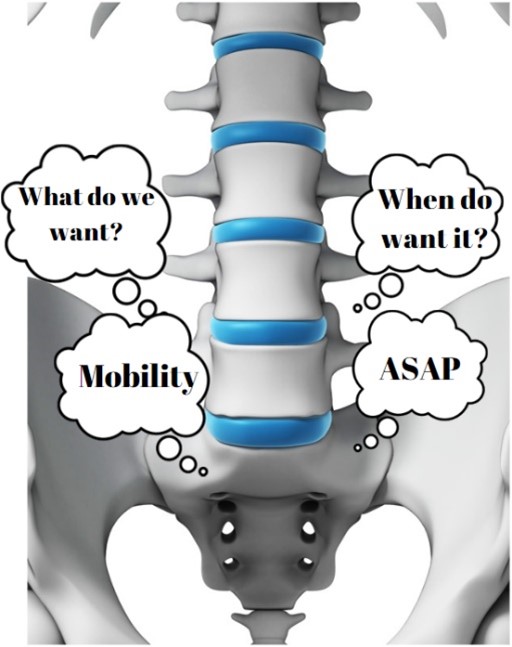 As the pain decreased slowly (way too slowly for my liking), I started to get little bit of mobility back, I started to play on the edges of pain and mobility to teach my body it is safe to move in these spaces, in these ranges.

As much as I fancy myself some sort of an amateur athlete (used to be at least), when I am rendered immobilized by a very ridiculous injury, I have to admit; I do a couple of quasi-athletic things, which is lifting weights and riding a bike for hours at a time. If I attempted a trail run or flag football, I would probably not last very long and the possibility for injury would skyrocket.

So what do we do – MOVE. Move often and MOVE BETTER. Challenge your system to do better. Get on the floor and roll, stretch, ease into the edges of what feels good. Notice I didn’t say force or push or power your way through places you never been before.  This will create your pain. WHY? Because we have mobilized our body OUTSIDE the space of stability.